Chinese state media have gone to town with their coverage of a tweet by Elon Musk.

The Tesla CEO tweeted out a link to a video about a Chinese rail station that was built in less than 9 hours.

“China’s progress in advanced infrastructure is more than 100 times faster than the US,” Elon Musk.

That was propaganda gold for Xinhua, China’s official news agency, which published articles in Chinese and English on Wednesday declaring that Musk was “amazed” by the rail project. 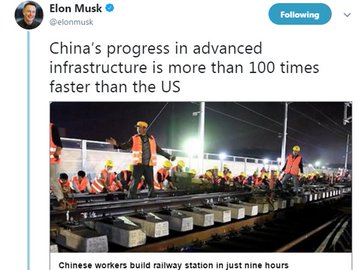 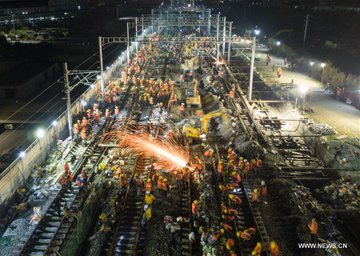 China’s high efficiency in infrastructure building has amazed many in the world in recent years. This time, even tech tycoon Elon Musk @elonmusk is impressed http://xhne.ws/y74Vk  See his tweets: http://xhne.ws/iaDcX

Xinhua said it wasn’t the first time that people around the world have been “amazed by the ‘China speed.'” Its article mentioned a 57-story tower that was built in 19 days in 2015.

Musk’s series of tweets was manna from heaven for the Chinese state outlets, which “want China to be seen as the global leader” in infrastructure, said Christopher Balding, an associate professor at the HSBC School of Business at Peking University.

Chinese social media users were less enthusiastic than state media. Many of the people who commented on the reports expressed doubts about the quality of the station’s construction.

China, whose rapid economic growth has been helped by huge investment in infrastructure, has a reputation for carrying out big building projects quickly. But there have been regular reports of shoddy work.

“Anyone who has lived in China can tell you story after story of low quality infrastructure projects. Just because they get thrown up fast, doesn’t mean they are quality,” said Balding, who’s based in the southern city of Shenzhen.

Musk appeared to be using the example of the Chinese rail station to highlight US failings in infrastructure, and he pointed to articles about the huge cost of building mass transit projects in California and New York.

But it may not be a fair comparison.

Some projects in China are carried out so poorly that they “need to be redone a few years after completion,” said Balding. And the economics of infrastructure are very different in a country where wages are far lower.

“In China they throw an astounding amount of people at projects with vast amounts of low skilled labor,” he told CNN, adding that safety standards are “non-existent” on some construction sites.

Musk, who wants to build a super fast subway system in Los Angeles, acknowledged those issues in his tweets.

“Higher safety & environmental requirements & labor costs explain only a small part of the difference,” he wrote. The real causes of the problems in the US are “an exponential growth in bureaucracy” and “a self-serving private sector consultant industry” whose fees give it an incentive to “maximize cost,” he added.

China’s progress in advanced infrastructure is more than 100 times faster than the US http://www.independent.co.uk/news/world/asia/chinese-workers-productivity-build-nanlong-railway-station-nine-hours-longyan-a8173881.html …

Higher safety & environmental requirements & labor costs explain only a small part of the difference. True root cause imo is an exponential growth in bureaucracy & a self-serving private sector consultant industry earning a % on project cost, incenting them to maximize cost.

— CNN’s Daniel Shane and Qiaoqiao Yu contributed to this report.

5 Cool Nigerian Chat bots That Will Make Your Life Easier

Top 18 Most Dangerous Computer Viruses Of All Time